The IS Attack on Kobane: Open Source Analysis (Updated)

Yesterday, the Islamic State detonated four suicide car bombs in the embattled town of Kobane. One VBIED detonated just inside the Mursitpinar border gate. After the explosion, clashes broke out between the YPG and the Islamic state in the area. The YPG has since claimed that the VBIED entered from Turkey. Ankara, in turn, has denied this.

I have done a brief open source analysis of the videos and imagery and have come to a few tentative conclusions. My analysis is far from definitive, but I think it deserves consideration.

In October 2014, IS released a video inside Kobane narrated by British photojournalist John Cantlie. In it, one can clearly see the position of Turkish tanks behind the granary silos on the Turkish side of the border of Kobane.

In the Cantile video, the tanks are visible at the 2:04 minute mark.

I have since asked two different people who have been to the border in recent days about the location of Turkey’s tanks. Both have told me that they are in the same position. Thus, it appears as if the Turkish military has deployed its forces on a hill on the eastern side of the town of Mursitpinar overlooking the town of Kobane.

In this video, the YPG is seen battling an unseen enemy – presumably the Islamic State- in the Mursitpinar train station that is situated along the border with Kobane. At the 1:15 minute mark you can see the Turkish flag. 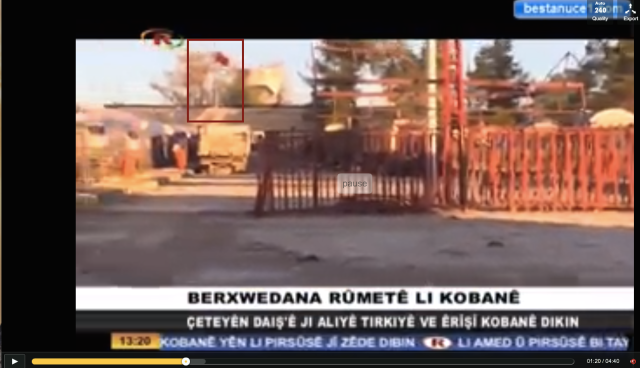 The location of the VBIED is some 15 meters (50 feet) inside the Mursitpinar border gate on the Syrian side.

The opens source imagery thus suggest the following: Yesterday, the YPG engaged in a firefight with the Islamic State on the Turkish side of the border. My best guess is that the firefight took place on the eastern side of the mursipinar border gate, between the border entrance and the silos. IS fighters attacked from northern side and the YPG entered Turkey from the south, perhaps on the eastern side of the Mursitpinar border gate. Other imagery shows IS gunmen standing near the silos. Turkey’s HDP has since claimed that these silos were used as a base for the attacking IS. The silos provided IS with two advantages: First, they give cover to their fighters clashing with the YPG. Second, they obstruct the view of the TSK’s tanks, which are set up on the hill directly behind them.

Based on this evidence, it appears as if the train station is a sort of ‘no-mans-land’ between where Ankara has set-up its defenses and the border with Kobane. (Dare I call it a buffer zone – I am hearing reports of trenches being dug as well.) This would explain how IS could move in behind the YPG. Moreover, it would also help explain the VBIED attack. The most plausible answer – at least according to what I have seen – is that the truck carrying the explosive was driven through this  ‘no-mans-land’. I do not think that Turkey supported this, helped to facilitate this, or is secretly hoping that IS takes over Kobane. Instead, I think a VBIED slipped through their buffer zone and entered Kobane early in the morning. Another possible scenario is that it travelled directly along the train tracks. Obviously, if I am correct this would be extremely embarrassing for Turkey.

My findings remain subject to change should more imagery become available, but this is my best guess based on what I have seen.

Based on the new imagery I have seen, I am prepared to say that I am moderately confident (which means: credibly sourced and plausible information, but not sufficient corroboration to warrant a higher level of confidence) that the VBIED did not drive along the train tracks to attack Kobane. The imagery in update 3 shows Kurdish trenches built at a right angle to the train tracks and the silos. A large truck could not have driven through these trenches. In addition, the location the VBIED, which is noted in my first update below, suggests that it entered on the western side of the Mursitpinar border gate. If my assessment is accurate, that suggests that the VBIED had to have entered from the Turkish side of the border.

Based on info provided by tweep Kevin Kelly, I am including an updated picture of the possible VBIED detonation point.

I have seen some new imagery that calls into question my assumption about where Turkey’s tanks near Kobane are located. The image below reportedly comes from an IS video filmed yesterday. This new image suggests that Ankara has moved its tanks off of the hill overlooking the Silos pictured below.

I am an Istanbul based PhD Candidate a King's College London.
View all posts by aaronstein1 →
This entry was posted in Uncategorized. Bookmark the permalink.

8 Responses to The IS Attack on Kobane: Open Source Analysis (Updated)