Creating a Timeline: The Turkish Convoy to the Suleyman Shah Tomb

On April 30th, Fehim Taştekin wrote in a piece for Al Monitor about some of the continuing questions about the Turkish military convoy sent to the Suleyman Shah Tomb. Taştekin wrote:

An 18-vehicle convoy was dispatched to the Tomb of Suleiman Shah to rotate the troops and resupply. The convoy entered Syria from the YPG-controlled Kobani and returned via ISIS-controlled Jarablus. A Syrian Kurdish source told Al-Monitor that, as per the accord reached with the officials of the “Kobani canton” who recently visited Turkey, the YPG provided security to the Turkish army convoy while passing through Kurdish-controlled area. According to this source, the convoy was stopped by ISIS in Cadde village, three kilometers [two miles] from the tomb, after it left the Kurdish area. Since official sources kept mum on what transpired at Cadde and along the way, speculation grew. There were unverified claims of ISIS refusing to allow the passage of the convoy, taking soldiers hostage and hoisting its flags on Turkish military vehicles. The only confirmed information was the convoy traveling 35 kilometers (22 miles) from Kobani to the tomb and having to use another route to return. The convoy, under pressure from ISIS, had to extend its route by 100 kilometers (62 miles) to get to Jarablus via Menbic and reach Turkey’s Karkamis crossing. While ISIS was uploading photos of the convoy online, the Turkish army issued a statement April 28 rebutting the claims. It read: “Resupply and personnel rotation is a routine operation carried out every three months. For the convoy’s trip to the outpost and its return, different routes were used. The routes followed are controlled by different groups. After completing its resupply and troop rotation operations, the convoy returned safely to Turkey on the same day.” Faruk Lologlu, the vice chairman of Turkey’s main opposition Republican People’s Party (CHP), said that sending the army convoy through a corridor where ISIS flags were flying was a shame, and the government was responsible for reaching this point. The army, which was forced to coordinate with the YPG and ISIS, was monitoring the clashes in the area around the tomb from its Gokturk-2 satellite.

I have done my own analysis of the youtube videos. (You can read my work here and here.)  My own analysis confirms that a group of men from ISIS did film the Turkish convoy at the Suleyman Shah Tomb. I have been doing more research and believe that the shadows in the youtube videos can be used to get a sense of the time of day when the videos were shot. And I believe that establishing a timeline can help to shed more light on the questions that Taştekin documented in his piece.

For reference, this is the route of the convoy.

The first video clearly shows the convoy moving through a YPG checkpoint at dawn. While we don’t know the exact location of the video, the location appears to be quite rural. This suggests that it was filmed somewhere outside of Ayn al Arab. Moreover, one can see mountains in the background.

The video also shows that the sun had just risen. According to calculations from Suncalc.net, I believe that the first was filmed after 5:00 am, but before 6:00 am.

Moreover, the placement of the sun further suggests that the people filming the video were looking back into Turkey, rather than into eastern Syria.  The road, for example, points north. The sun rises in the east. Thus, I believe that the camera is pointed northeast.

The second ISIS provided video provides more clues about the time it was shot. I am absolutely certain that ISIS filmed its first video of the Turkish convoy directly outside the entrance to the Suleyman Shah Tomb. Yet, as Taştekin mentioned, there are reports that Turkish soldiers were taken hostage. I am skeptical. 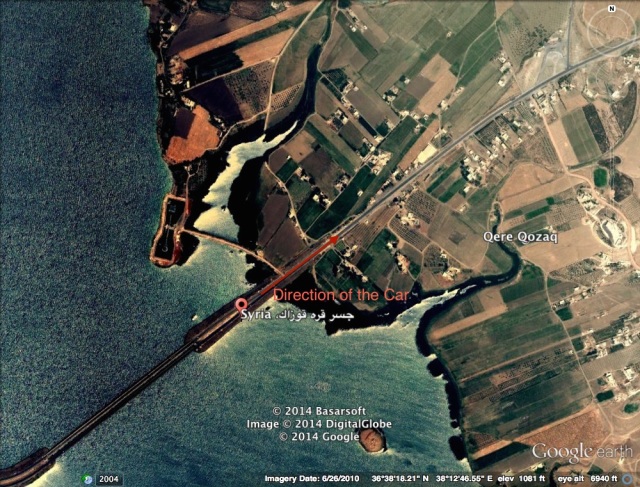 Now, in this video of Turkish soldiers standing outside of one of the convoy’s vehicles, one can clearly see the direction of the shadows. 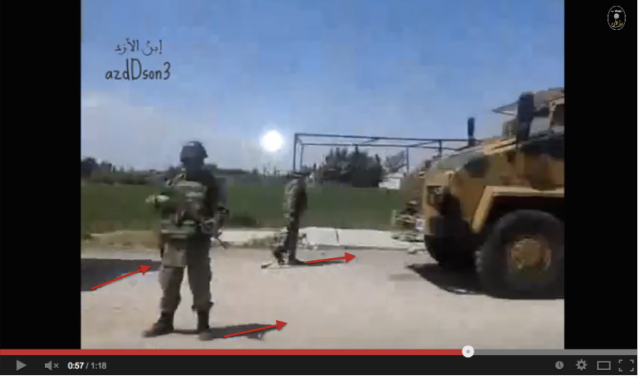 In addition, the video also suggests that the sun was behind the car. In the following screen shot, it is easy to discern the glare on the rear driver’s side window.

Thus, the timeline suggests that by 11:00 am the convoy was well into the process of unloading its cargo. The video, for example, shows that the two tanks that had been transported to support the operation had already been unloaded from the transport vehicles.

This suggests that convoy had been stopped for some time before the video was shot. (I’ve been told it could take as little as 15 minutes, or as much as 1 hour to unload the tanks.) Now, if my estimates are right, then the supposed confrontation with ISIS would have had to take place sometime after 6:45 am, but before the convoy had the time to park and then offload its two tanks (Let’s say 10:00 am to account for the time needed to unload the tanks).

Now, the distance between Ayn al Arab and the Tomb is 35 km. And the distance from the Tomb to Manbij is another 30 km. And, if we look back at the first video, the convoy was not experiencing any problems between 6:00 am and 7:00 am. While it is impossible to calculate the speed of the convoy, the first video shows that the convoy had to pass through checkpoints. This suggests that the convoy could not travel very fast. Based on the timing, I think it is safe to dismiss some of the reports that the convoy was met at the bridge by ISIS, forced to go to Manbij, and then allowed to return. The timeline does not suggest that this is plausible.

Now, the final ISIS video was clearly filmed at dusk.

To add to this analysis, I counted the vehicles in the convoy in each video to try and draw a more definitive conclusion about the report that Turkish troops were ambushed by ISIS and briefly detained. According to Roy Gutman:

Turkish troops conducting a resupply mission to a small Turkish military post inside Syrian territory were ambushed and detained Wednesday by Islamic extremists affiliated with the Islamic State of Iraq and Syria, according to Turkish media reports. The troops were later returned to Turkey, news outlets in the Turkish city of Sanliurfa said. But it wasn’t clear what happened to the four armored personnel carriers they’d been traveling in. One report said ISIS had kept the vehicles, which had been seen flying ISIS flags.

In the first video filmed shortly after sunrise, there is:

And finally, in the last ISIS filmed video, there are: 4 Kirpis, 2 tanks being transported on 2 different vehicles, 1 blue cargo truck, M984 HEMTT, and 2 Otokar Cobras. Yet, like in the first case, I don’t think that the video does not show the whole convoy.

I am an Istanbul based PhD Candidate a King's College London.
View all posts by aaronstein1 →
This entry was posted in Uncategorized and tagged Convoy, Suleyman Shah Tomb, Syria. Bookmark the permalink.

1 Response to Creating a Timeline: The Turkish Convoy to the Suleyman Shah Tomb